The system may be used as an independent installation or a support system for other drainage inlet types in one- or two-level arrangements. One wellpoint level makes it possible to lower the ground water table up to 4 m, and two levels, up to 7 m.
All metal elements of the system are made of aluminium. 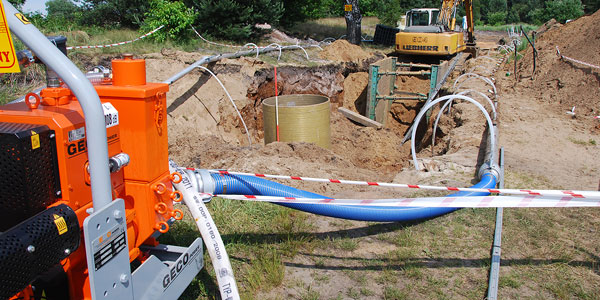 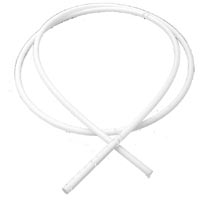 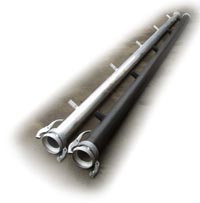 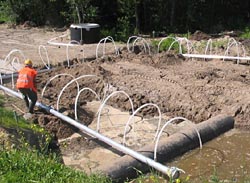 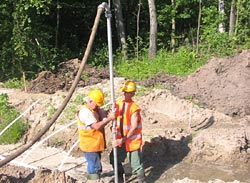 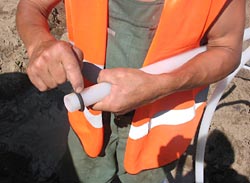 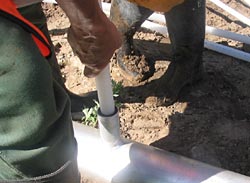 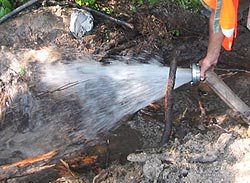 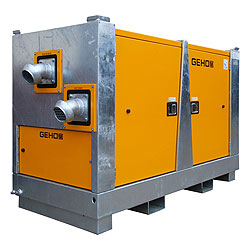 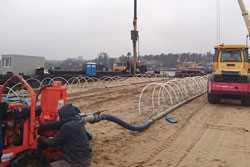 As compared to conventional structures, the IgE-81 wellpoint system has the following properties:

Wellpoint systems are available in two versions: IgE 81/32 and IgE 81/63. Both versions differ from each other above all in the wellpoints that are used. The most commonly used version, IGE 81/32, is based on flexible wellpoints, 32 mm in diameter.

In the case of the IGE 81/63 option, diameter 63 wellpoints are used. This version allows for more efficient drainage. As compared to version IGE 81/32, a flexible connector with gaskets is additionally required for each wellpoint in order to connect it to the suction header pipe. Also, the suction header and the stoppers that close its ferrules are different.

Another available variant of the IgE wellpoint system is one in which certain elements (suction header pipes and bends) are made of modified HDPE polyethylene.
The range of operation for a system like that is the same as in the case of fully aluminium systems. It is recommended that polyethylene elements be stored either under a roof or cover.

Wellpoint accessories , could be ordered in sets or in individual configurations.)Typical proposed sets are for 50,80, and 100 wellpoint filters..

In most cases , wellpoints are installed in the ground with the use of water jetting, in some cases drilling method is used.

In our standard accessories set, there are used jetting pipes with bend and jetting hoses (usually hydrant types) 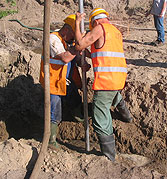 In our website, you can find photos showing welpoint system installation and work.. Bellowe you can see 2 example video clips.

Many thanks to EKO BUD sp. z o.o. , Katowice company for help in preparing the material

We thank you for help in preparing the video to the company ZIHB Majewski, Gliwice

Wellpoint system cannot  function, without the pump , to which the accesories will be  connected.  The necessary equipment is wellpoint pump which is able to produce the vacuum and evscuate as well water as air.The pump usually is working continuously until lowered water table in the ground is required.

The pumps can be diesel engine or electric motor driven.

Rental of pumps and wellpoint accessories.

Important part of our offer are the services of our pump hire department. We can offer several types of pumps (piston type, centrifugal vacuum assisted, selfpriming ) in sets with different kinds of accessories..

Contact us about wellpoint dewatering solutions
We will analyse your problem, select and recommend optimal solutions!